The First Thirty Days of Hope

Hope came into our lives on January 20th 2009. So, Tommy and I thought it was time we reviewed and analyzed these first thirty days. This way, perhaps we can gain perspective on the achievements more than the pitfalls that have happened during this time.

By the end of the first thirty days of Hope, most of her accomplishments can be seen as decreases or increases in frequency, intensity and duration of the following behaviors: 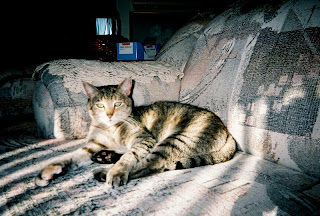 Hope in the living room catching some sun strips.
As you can see, she is becoming more comfortable and as she is getting calmer so are we. Don't get us wrong, she can still frighten us when she starts screaming like a banshee. 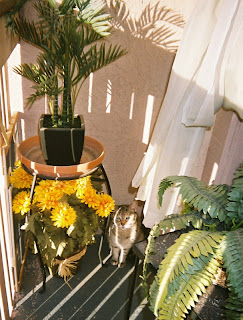 Here Hope is during her first visit to our beloved balcony. At first, it seemed like a good thing but later when she tried to take the space over for herself we decided it would be awhile more before she gets balcony privileges again. 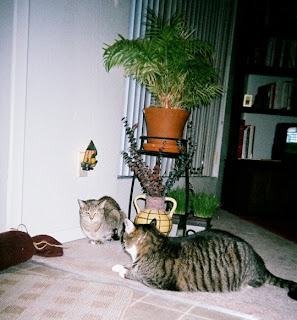 Hope and Tommy chatting. He told her that even though she is a troll sometimes, she is now our forever sister and we want her to feel safe and have more fun because that will be more fun for us too.

We've got high hopes that Hope will continue to make progress over the months to come.
Posted by Shilgiah the Cat at 10:12 AM 9 comments:

Hi everyone. Tommy here. Having two sisters really can wear a guy out. Shilgiah needs my reassurance and Hope...well, she is a piece of work. She acts so tough but I know she is just really scared. This evening she was being all troll like and she had just smacked me on the arm. So I reached out and whopped her on the head. I did it gently...really I did!

Can you believe it, mom got all mad at me for hitting her back! Mom said I had to be the more mature one and show good manners. O.K. I'll be mature...till mom isn't looking. This little girl needs to be taught a lesson or ten about good manners! 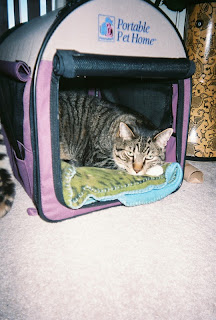 In the meantime, I think I'll just take a nap and dream of better days to come.
Posted by Shilgiah the Cat at 6:01 PM 6 comments:

My little sister Hope makes me dizzy sometimes. Just when it seems she is becoming progressively sweeter, her personality changes and she goes from purring to pouncing! Eeeek!! 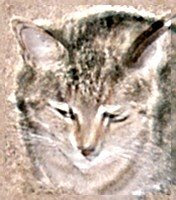 I am getting used to her and am not nearly as scared of her as I used to be. To tell you the truth, I've actually been downright nice to her and I sometimes even think I like her. However, today she really tested my patience.

I tried really hard not to be peeved about her taking a nap in my favorite napping place on mom's bed up between the pillows. However, this afternoon she was napping there and at first I didn't see her and started to climb up on the pillows and the little troll screamed and pounced on me!

The only good thing to come out of that was that mom made her take a time out in the study so we could all cool down. She didn't even say "I'm sorry" when mom let her out after calm down time. Sheesh!
Posted by Shilgiah the Cat at 2:54 PM 7 comments:

It has been a mellow weekend. We all just spent time together. But mom also made sure each of us got some alone time with her. She brushed me and talked to me about how sweet I was and let me know that eventually Little Miss Hissy Fit (a.k.a. Hope) will realize that she is safe and will get all the food she wants and will never have to be cold or hungry again and then she will turn into a wonderful sister. I wonder how long that will take? 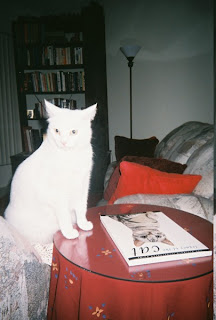 Have a wonderful week to come everyone!
Posted by Shilgiah the Cat at 2:27 PM 6 comments:

What an interesting week it has been. Here are a few of the things that happened. I'll tell you more later. Mom suddenly got older and had a birthday on Tuesday. Tommy and I got to spend some time alone on the balcony in the moderately warm winter sun which mom hates because it means her favorite skiing place (because it is just 10 minutes away from home) has too much melting snow. 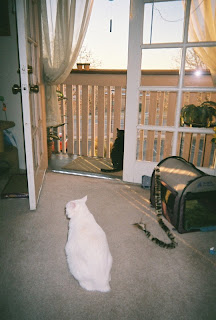 I enjoyed sniffing the air from the study. Hope got to explore the rest of the house while we were in the study and on the balcony with mom.

Hope has alternatively become 1. more friendly and 2. more troll like...go figure? For no reason whatsoever, sometimes Hope will purr and act happy to see me and Tommy. Then, in the flash of a millisecond, she hisses, growls and sometimes even screams at us!!! She is really taxing my patience. This evening when she walked by and batted at me...I couldn't help myself and just batted right back at her. And can you believe it, she screamed at me!!! How Rude!!!!!!!
Posted by Shilgiah the Cat at 5:53 PM 5 comments:

Hope found a perfect place to hide and snooze. It's just her size and we are too big to fit into that spot so I think she feels safe there. 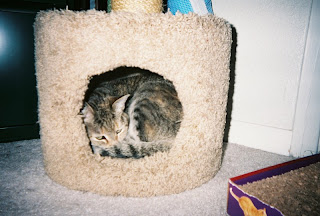 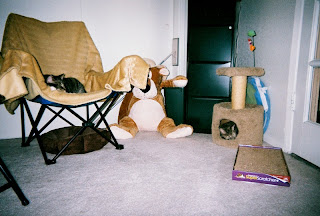 She even got comfortable enough to allow Tommy to nap nearby on his favorite chair. I'm still a bit too apprehensive around her.

We all hope all of you have a wonderful week! I hope Hope quiets down a lot more this week. We shall see.
Posted by Shilgiah the Cat at 4:30 PM 7 comments: 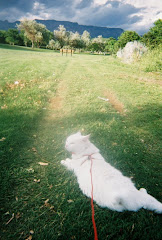